” The day went better than we could have imagined. Everything went so smoothly. Olga was so wonderful and relaxed to have around as we were getting ready, and a wonder to have at hand to answer questions we hadn’t thought about previously about how the day would run. The staff in the hotel Doolin were just brilliant, they took care of everything and made sure we as the couple were looked after in the midst of the madness. I can’t praise them highly enough for all they took care of for us!

It was a beautiful, quirky and relaxed setting. Definitely not a typical hotel venue. The combination of the barn and the courtyard was just perfect.

We had a humanist ceremony in the courtyard of the Hotel Doolin, celebrated by Bridget Carlin. Bridget was wonderful in helping us to craft the ceremony, she was so patient and well informed and such a lovely woman. My sister and bridemaid helped with the handfasting part. We had friends perform the music and do two readings for us. It was so nice to have the people important to us involved in the ceremony.

She was so accommodating and friendly. From the initial booking, first meeting, ongoing communication right through to the day, she was phenomenal. She was so easy and enjoyable to have around on the morning of the wedding, just slotting in comfortably with my family and then sliding into the background, capturing so many candid photos and special images that I would have missed. She was so helpful as the day progressed, keeping us on schedule and completely working with the things that we had asked to prioritise. She had no problem adjusting the venue and order of some of the group photos at the last minute to help me facilitate my childcare arrangements for the day which was such a big help and relief. She was really so, so lovely and I’ll be recommending her to anyone who will listen “. 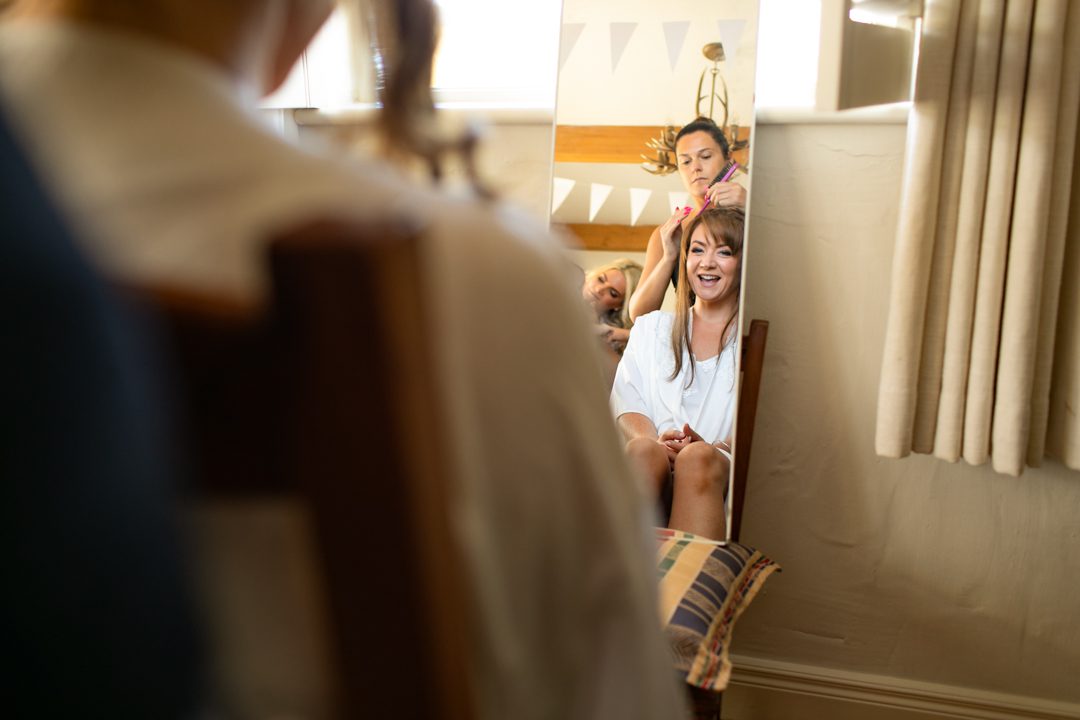 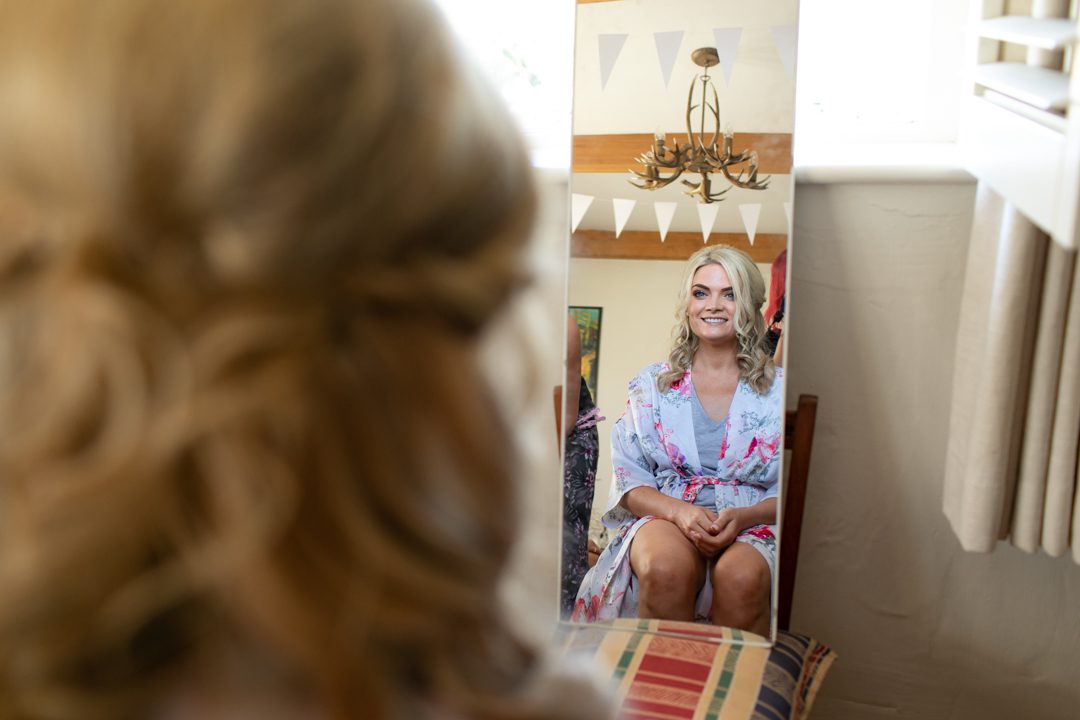 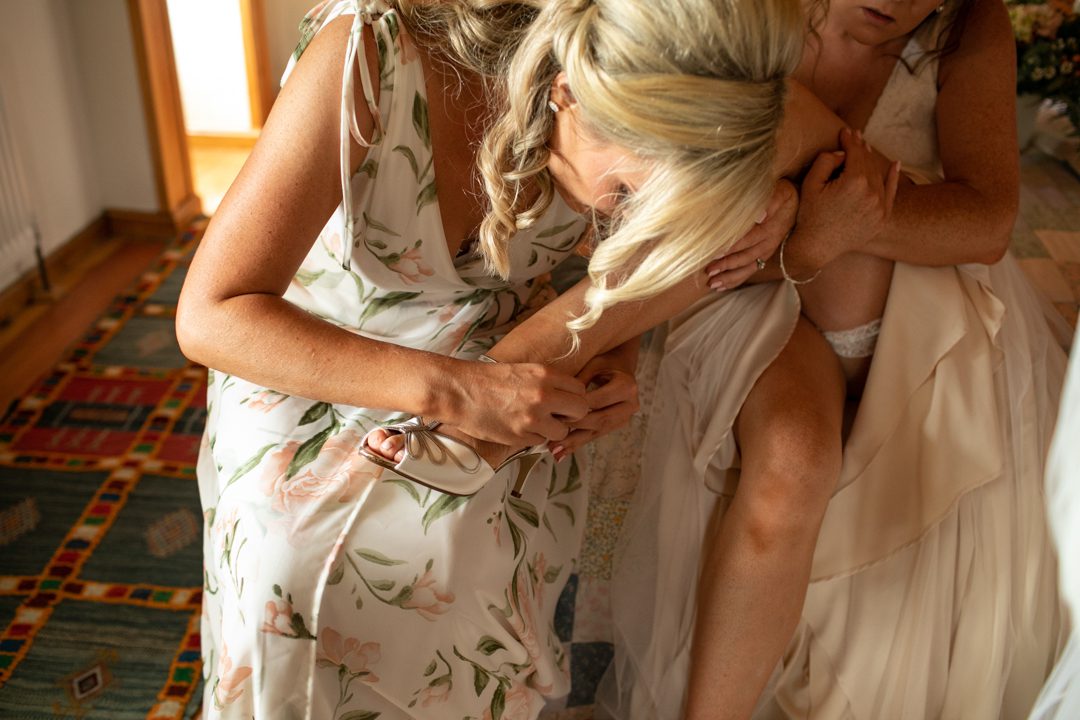 We first met in Worcester, Massachusetts, in 2012, where we were both hired by a non profit social care agency. The company recruited in Ireland that year through our two different colleges. I (Ruth) moved to the States in Aug 2011, six months before Declan. When new international recruits were hired, the existing staff were asked if they would be willing to host the new arrivals and help get them settled. One of my roommates volunteered us to host a new staff arriving around New Years, who turned out to be Declan. I couldn’t shake him and am still hosting him.

A week after my 31st birthday. Declan had said he had ordered something special for my birthday but it was late arriving. When it finally did arrive, I don’t think his nerves could handle waiting another minute to give it to me. I was just out of the shower and he was half way through making spaghetti Bolognese for dinner. It seemed like a completely random moment so it took me completely by surprise. He had made a photo book, a time line of our relationship, the apartments we’d lived in, the trips we’d taken, each page with a caption. When I got to the second last page, it was a secret photo he’d taken of me sitting on our couch, the caption said this was where he knew he wanted to spend the rest of his life with me…and when I turned to the last page it said “Will you marry me?”. When I turned around he was down on one knee with a ring!

How did you go about planning your dream day?

Very slowly! We were living in America and wanted to get married at home in Ireland. Trying to organize it from abroad was hard. Hotel Doolin was the one and only place we viewed. Well, I viewed it when I was home on my own for a visit. I knew immediately it was the perfect place so just had to convince Declan! It just had the best feeling about it and after all our research online, there was absolutely no comparing the service and package they offered.  We booked a date two years out as we were planning to relocate home during that time so once the date was booked everything went on the back burner. We ended up squeezing all our major life milestones into that time period, we moved home and had our daughter during that time. Turns out theres nothing like a newborn so make you a laid back bride. Luckily, the staff at Hotel Doolin were unbelievable and took care of so much for us . 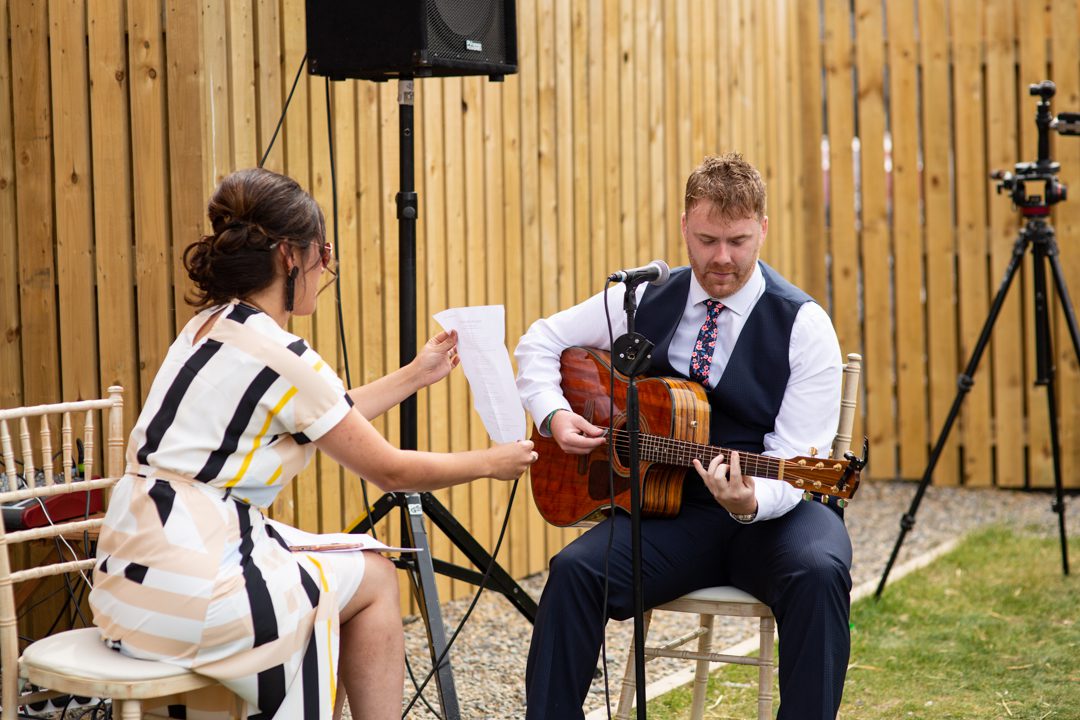 The only thing we decided and agreed on from the outset was that we wanted a laid back, informal day, a celebration. We both liked the idea of a barn wedding, something a little rustic but there are very few barn venue options in Ireland.  We booked the Hotel Doolin as their marquee and courtyard fit into that ideal. Funnily enough, during the run up to the wedding the hotel’s plans to erect a permanent structure got moved up and they ended up building a barn instead of the marquee! Serendipity!

Were there any near disasters/funny incidents?

As I was about to make my entrance down the aisle, my bridesmaids had started down and it was my turn next. Just as my dad and I were about to go, our family friend (and driver for the day) slipped in ahead of us. I’m not sure what he did when he got out there but there were cheers and applause so I’m sure there was some sort of performance. I thought Donal (from the hotel who was coordinating the day) was going to have a heart attack, but it was really funny and eased my nerves a little.

What was the highlight of your day?

It would be so hard to pick one particular moment.

The whole day was just so enjoyable. Two points that stand out in my mind are when I got to the top of the aisle to Declan. I was so nervous before walking out infront of everyone but once I got to Declan I was able to relax and remember what the whole day was about. Also, after the speeches were done! Its usually my favourite part of a wedding but as I was speaking too, and I never got around to writing a speech (!) I was just so anxious for that last task of the day to be over. I remember going out to the courtyard and sitting down after the speeches and the meal and thinking, ok, we can relax now!

Did you make anything yourselves for the day?

The handfasting rope, from materials belonging to our mothers, grandmothers and the baby blanket we brought our daughter home from the hospital in.

My father also made a beautiful case for our rings out of a piece of wood. It was really something special, like a tree trunk with our names burned into the top, that split in half to reveal two hollows on either side with twigs to hold the rings. 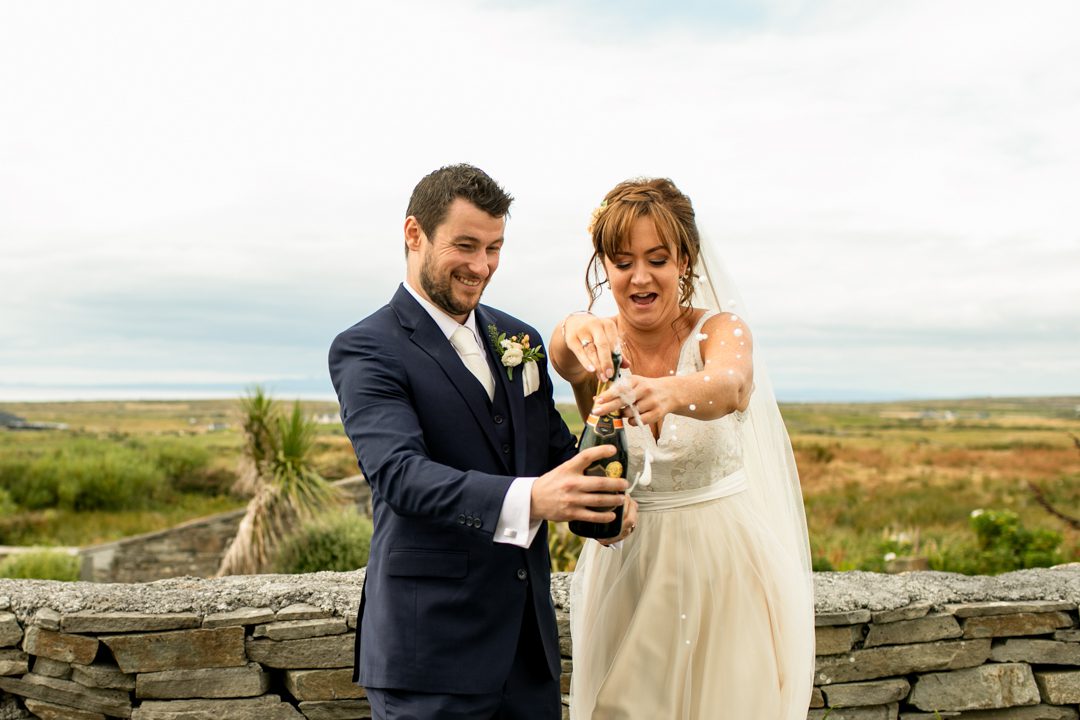 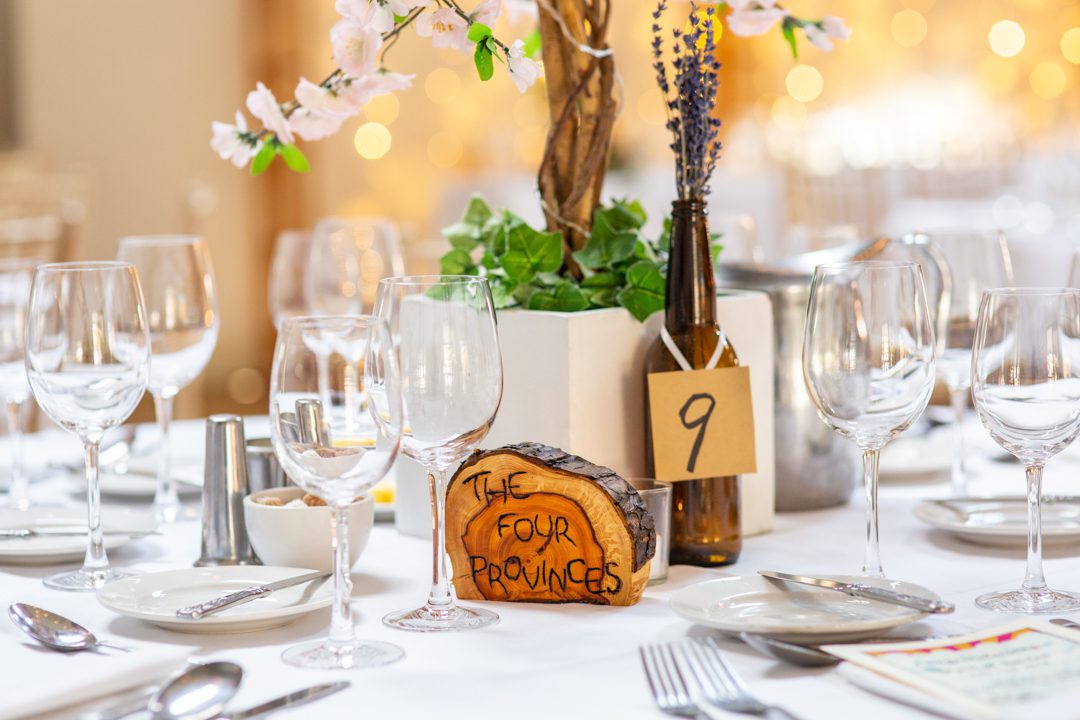 What was the best moment of the day for you?

After the ceremony, when the group photos were done, just having that little bit of time, just the two of us, to be together and take it all in as a newly married couple.

Did you go on honeymoon, and if so where to and for how long?

We went on honeymoon a week after the wedding to Sorento, Italy for one week. We didn’t want to go anywhere too far or for too long as we have a young daughter. The week was perfect to recover and by the end of it we were dying to get back to our baby!

As we said, everything just went so well and we were so happy with everything. It turned out to be an extra bonus that so many of the people we hired for different aspects of the wedding knew each other and had worked together before. We so, so highly recommend everyone who was a part of our day.

•     Ceremony/Reception Music: provided by our friends